skip to main | skip to sidebar

Right Of The Star

“In 1960 , When Nixon ran for President against Kennedy, … The 1960 election turned out to be extremely close, and there were voting frauds in several states. For a time Nixon considered the possibility of demanding a recount but finally decided against it. “If I were to demand a recount,” he explained, “the organization of the new administration and the orderly transfer of responsibility from the old to the new might be delayed for months. The situation within the entire federal government would be chaotic.” Despite his decision, newsman Earl Mazo launched an investigation of the voting frauds and began running a series of articles about them in the New York Herald Tribune. Early in 1960, after the first four articles had appeared, Nixon invited Mazo to his home for a chat. “Earl,” he said, as they shook hands, “ those are interesting articles you are writing – but no one steals the presidency of the United States” He went on to say that the country would be torn by partisan bitterness if there was an official challenge of the election result and that the damage to America’s foreign relation might be irreparable. ...   Mazo agreed to drop the series! (emphasis added) 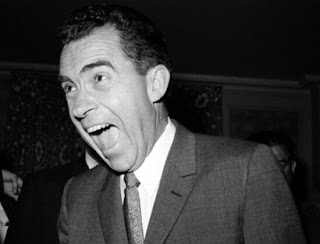